All Days Are Nights: Songs for Lulu is the sixth studio album by Canadian-American singer-songwriter Rufus Wainwright, first released in Canada through Decca Records on March 23, 2010.

The album was produced by Wainwright (with Pierre Marchand on three tracks), and mixed by Marchand, who produced Wainwright's second album, Poses (2001).

All Days Are Nights is Wainwright's first release since the death of his mother, folk singer Kate McGarrigle, who died from cancer in January 2010. While Wainwright is known for lush orchestrations and arrangements, this album contains piano and voice work, with twelve original songs. Three songs are settings of William Shakespeare's sonnets ("Sonnet 10", "Sonnet 20", and "Sonnet 43").

Following larger projects such as his tribute concert series to Judy Garland and subsequent album release (Rufus Does Judy at Carnegie Hall, 2007), Release the Stars (2007), and annual Christmas shows billed as the "McGarrigle Christmas Hour", Wainwright intended for his next studio release to be a simpler piano and voice album.

The first part of the title, "All Days Are Nights", comes from the final couplet of William Shakespeare's "Sonnet 43" ("All days are nights to see till I see thee..."). When asked about the reference to "Lulu", which appears in the second part of the album's title, Wainwright stated in a November 2009 interview that Lulu is a "dark, brooding, dangerous woman that lives within all of us", similar to the Dark Lady character in Shakespeare's sonnets.

Wainwright claimed that his Lulu was Louise Brooks in the 1929 movie Pandora's Box. He also stated in an interview with Jian Ghomeshi that Lulu is a reference to the opera of the same name by Alban Berg, which was adapted from Frank Wedekind's plays Earth Spirit (or Erdgeist, 1895) and Pandora's Box (or Die Büchse der Pandora, 1904), the latter of which inspired the aforementioned film by G. W. Pabst.

Images used for the album insert and other promotional material were taken during a photo shoot with photographer Kevin Westenberg on January 5, 2010, at Park Avenue Armory in New York City. On March 15, 2010, Wainwright previewed the album by performing an intimate concert at Rose Bar in the Gramercy Park Hotel in New York City.

"Who Are You New York?" was first released as a single in digital format on the Canadian iTunes Store on March 2, 2010. 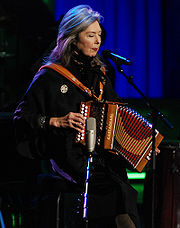 Kate McGarrigle, Wainwright's mother and the subject of "Zebulon"

In the album's opening track, "Who Are You New York?", Wainwright uses rolling arpeggios while recounting an "obsessive search for an unnamed object of desire". The song was originally written for a film, but was rejected by the movie's producers (to Wainwright's apparent relief). References to New York City in the song's lyrics include Grand Central Terminal, Madison Square Garden and the Empire State Building.

"Sad with What I Have", described as an "abyss of self-pity", contains a reference to Bluebeard, the title character in a 1697 fairy tale by Charles Perrault.

"Martha" consists of conversational lyrics inspired by Wainwright's sister Martha. Wainwright claimed the song is about the "finite nature of time – you can go on and on, and one day, everybody's gone and there's nothing you can do about it."

One NME reviewer described the upbeat track "Give Me What I Want and Give It to Me Now!", just over two minutes in length, as a "seemingly ritzy show-tune, undercut by a vague hint of something sinister looming up ahead." Directed towards critics of his opera, Wainwright considers the song one of the most personal tracks on the album.

"True Loves" is an aphoristic reflection on love that concludes "A heart of stone never goes anywhere".

"The Dream" is a melancholic song about the "sense of loss you feel after waking from a beautiful vision".

In the "sweet-scented" ballad "What Would I Ever Do with a Rose?", Wainwright poetically meditates on love and nature. "Les feux d'artifice t'appellent" is the closing aria from Wainwright's debut opera, Prima Donna, which premiered at the Manchester International Festival in July 2009. On the album, Wainwright taps on the piano's sounding board and runs his hands along its strings to simulate the "crackle and cascade" of fireworks (which light up the Paris skyline in the opera).

"Zebulon", which has a "slow sad melody", contains references to an old crush, as well as to Wainwright's mother (folk singer Kate McGarrigle) and sister. Wainwright wrote the song while his mother was sick and staying at the Royal Victoria Hospital in Montreal, as evident by the line "My mother's in hospital, my sister's at the opera". The Edmonton Journal's Sandra Sperounes described the song as a reenactment of Wainwright's "plodding" steps, which steadily build into a "promise of triumph or, at the very least, temporary relief from pain". Both Wainwright and his mother claimed the song to be one of their favorites, the former even considering it one of the most "profound" pieces on the album.

Three of the songs on the album are adaptations of Shakespeare's sonnets—"Sonnet 10", "Sonnet 20", and "Sonnet 43". Wainwright composed music for each of the sonnets, along with several others, when collaborating with avant-garde stage director Robert Wilson and the Berliner Ensemble on a project known as "Sonette". The production premiered in Berlin in April 2009, and contained 24 sonnets, each stylized with cross-dressing actors, "lavish costumes, huge hair-dos and [Wilson's] trademark lighting and puppet-like choreography.

"Sonnet 10", considered one of Shakespeare's procreation sonnets (which encourage the young man to marry and father children), marks the first time the poet indicates his own devotion to the young man.

Regarding the sonnets, Wainwright stated: "I had never really immersed myself in them and I came out the end with the traditional view that they could be the greatest pieces of literature ever written." NME music reviewer Luke Lewis suggested that listeners might find "Sonnet 43" pretentious due to its "oblique, wonky melodies" and "Sonnet 10" difficult depending on their tolerance for "piano-led whimsy and Elizabethan circumlocution".

However, he complimented "Sonnet 20" for its less abstract melodies. The Times music critic Peter Paphides commented that the sonnets reined in Wainwright's grandiose tendencies, setting them apart from original music featured on the album.

Rufus McGarrigle Wainwright (born July 22, 1973) is an American-Canadian singer, songwriter, and composer. He has recorded seven albums of original music and numerous tracks on compilations and film soundtracks. He has also written a classical opera and set Shakespeare sonnets to music for a theater piece by Robert Wilson.

Wainwright's self-titled debut album was released through DreamWorks Records in May 1998. His second album, Poses, was released in June 2001. Wainwright's third and fourth studio albums, Want One (2003) and Want Two (2004), were repackaged as the double album Want in 2005.

In 2007, Wainwright released his fifth studio album Release the Stars and his first live album Rufus Does Judy at Carnegie Hall. His second live album Milwaukee at Last!!! was released in 2009, followed by the studio albums All Days Are Nights: Songs for Lulu (2010) and Out of the Game (2012).

The double album Prima Donna (2015), was a recording of his opera of the same name. His ninth studio album Take All My Loves: 9 Shakespeare Sonnets (2016), featured nine adaptions of Shakespeare's sonnets.

Wainwright is the son of musicians Loudon Wainwright III and Kate McGarrigle, and the older brother of singer Martha Wainwright.

Martha it's your brother calling
Have you had a chance to see father?
Wondering how's he doing and
There's not much time
For us to really be that angry at each other anymore