Elvis Presley - All Shook Up

Elvis Aaron Presley (January 8, 1935 – August 16, 1977) was an American singer and actor. Regarded as one of the most significant cultural icons of the 20th century, he is often referred to as the "King of Rock and Roll" or simply "the King".

Presley was born in Tupelo, Mississippi, and relocated to Memphis, Tennessee, with his family when he was 13 years old. His music career began there in 1954, recording at Sun Records with producer Sam Phillips, who wanted to bring the sound of African-American music to a wider audience.

Accompanied by guitarist Scotty Moore and bassist Bill Black, Presley was a pioneer of rockabilly, an uptempo, backbeat-driven fusion of country music and rhythm and blues. In 1955, drummer D. J. Fontana joined to complete the lineup of Presley's classic quartet and RCA Victor acquired his contract in a deal arranged by Colonel Tom Parker, who would manage him for more than two decades.

Presley's first RCA single, "Heartbreak Hotel", was released in January 1956 and became a number-one hit in the United States. With a series of successful network television appearances and chart-topping records, he became the leading figure of the newly popular sound of rock and roll.

His energized interpretations of songs and sexually provocative performance style, combined with a singularly potent mix of influences across color lines during a transformative era in race relations, made him enormously popular—and controversial.

In November 1956, Presley made his film debut in Love Me Tender. Drafted into military service in 1958, Presley relaunched his recording career two years later with some of his most commercially successful work. He held few concerts however, and guided by Parker, proceeded to devote much of the 1960s to making Hollywood films and soundtrack albums, most of them critically derided.

In 1968, following a seven-year break from live performances, he returned to the stage in the acclaimed television comeback special Elvis, which led to an extended Las Vegas concert residency and a string of highly profitable tours. In 1973, Presley gave the first concert by a solo artist to be broadcast around the world, Aloha from Hawaii. Years of prescription drug abuse severely compromised his health, and he died suddenly in 1977 at his Graceland estate at the age of 42.

Presley is one of the most celebrated and influential musicians of the 20th century. Commercially successful in many genres, including pop, country, blues, and gospel, he is the best-selling solo artist in the history of recorded music. He won three competitive Grammys, received the Grammy Lifetime Achievement Award at age 36, and has been inducted into multiple music halls of fame.

Presley and Linda Thompson split in November 1976, and he took up with a new girlfriend, Ginger Alden. He proposed to Alden and gave her an engagement ring two months later, though several of his friends later claimed that he had no serious intention of marrying again.

Journalist Tony Scherman wrote that by early 1977, "Presley had become a grotesque caricature of his sleek, energetic former self. Hugely overweight, his mind dulled by the pharmacopia he daily ingested, he was barely able to pull himself through his abbreviated concerts." In Alexandria, Louisiana, he was on stage for less than an hour, and "was impossible to understand".

On March 31, Presley failed to perform in Baton Rouge, unable to get out of his hotel bed; a total of four shows had to be canceled and rescheduled. Despite the accelerating deterioration of his health, he stuck to most touring commitments. According to Guralnick, fans "were becoming increasingly voluble about their disappointment, but it all seemed to go right past Presley, whose world was now confined almost entirely to his room and his spiritualism books."

A cousin, Billy Smith, recalled how Presley would sit in his room and chat for hours, sometimes recounting favorite Monty Python sketches and his own past escapades, but more often gripped by paranoid obsessions that reminded Smith of Howard Hughes.

"Way Down", Presley's last single issued during his career, was released on June 6. That month, CBS filmed two concerts for a TV special, Elvis in Concert, to be aired in October. In the first, shot in Omaha on June 19, Presley's voice, Guralnick writes, "is almost unrecognizable, a small, childlike instrument in which he talks more than sings most of the songs, casts about uncertainly for the melody in others, and is virtually unable to articulate or project".

Two days later, in Rapid City, South Dakota, "he looked healthier, seemed to have lost a little weight, and sounded better, too", though by the conclusion of the performance, his face was "framed in a helmet of blue-black hair from which sweat sheets down over pale, swollen cheeks".

His final concert was held in Indianapolis at Market Square Arena, on June 26. 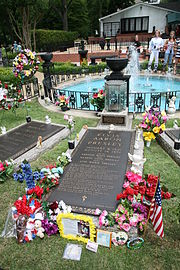 The book Elvis: What Happened?, co-written by the three bodyguards fired the previous year, was published on August 1. It was the first exposé to detail Presley's years of drug misuse. He was devastated by the book and tried unsuccessfully to halt its release by offering money to the publishers.

On the evening of Tuesday, August 16, 1977, Presley was scheduled to fly out of Memphis to begin another tour. That afternoon, Ginger Alden discovered him in an unresponsive state on a bathroom floor.

According to her eyewitness account, "Elvis looked as if his entire body had completely frozen in a seated position while using the commode and then had fallen forward, in that fixed position, directly in front of it. [...] It was clear that, from the time whatever hit him to the moment he had landed on the floor, Elvis hadn't moved."

Attempts to revive him failed, and his death was officially pronounced at 3:30 p.m. at the Baptist Memorial Hospital.

President Jimmy Carter issued a statement that credited Presley with having "permanently changed the face of American popular culture". Thousands of people gathered outside Graceland to view the open casket. One of Presley's cousins, Billy Mann, accepted $18,000 to secretly photograph the corpse; the picture appeared on the cover of the National Enquirer's biggest-selling issue ever.

Alden struck a $105,000 deal with the Enquirer for her story, but settled for less when she broke her exclusivity agreement. Presley left her nothing in his will.

Presley's funeral was held at Graceland on Thursday, August 18. Outside the gates, a car plowed into a group of fans, killing two women and critically injuring a third. About 80,000 people lined the processional route to Forest Hill Cemetery, where Presley was buried next to his mother. Within a few weeks, "Way Down" topped the country and U.K. pop charts.

Following an attempt to steal Presley's body in late August, the remains of both Presley and his mother were reburied in Graceland's Meditation Garden on October 2.

Audio All Shook Up

A well I bless my soul
What's wrong with me?
I'm itching like a man on a fuzzy tree
My friends say I'm actin' wild as a bug
I'm in love
I'm all shook up
Mm mm oh, oh, yeah, yeah!

My hands are shaky and my knees are weak
I can't seem to stand on my own two feet
Who do you thank when you have such luck?
I'm in love
I'm all shook up
Mm mm oh, oh, yeah, yeah!

Please don't ask me what's on my mind
I'm a little mixed up, but I'm feelin' fine
When I'm near that girl that I love best
My heart beats so it scares me to death!

She touched my hand what a chill I got
Her lips are like a volcano that's hot
I'm proud to say
she's my buttercup
I'm in love
I'm all shook up
Mm mm oh, oh, yeah, yeah!

My tongue gets tied when I try to speak
My insides shake like a leaf on a tree
There's only one cure for this body of mine
That's to have the girl that I love so fine!

She touched my hand what a chill I got
Her lips are like a volcano that's hot
I'm proud to say
she's my buttercup
I'm in love
I'm all shook up
Mm mm oh, oh, yeah, yeah!

Led Zeppelin – Over the Hills and Far Away

Linkin Park – Shadow Of The Day