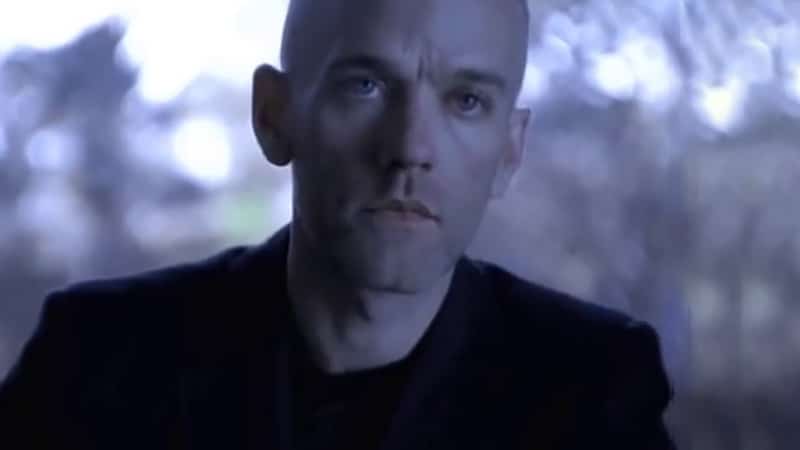 "At My Most Beautiful" is a song by the American alternative rock band R.E.M. During the song's creation, members of the group noted its similarity to the work of the Beach Boys and purposefully fashioned it to resemble that band's output. Singer Michael Stipe strove to make his lyrics the most romantic he had ever written, and the piano-driven ballad became R.E.M.'s first straightforward love song.

Released on the group's 1998 album Up, it was issued as the third single from that record the following year, reaching number 10 on the UK Singles Chart.

R.E.M. bassist Mike Mills stated that after he composed the piano part to "At My Most Beautiful", he felt it sounded like music the Beach Boys' Brian Wilson would have written two decades prior. Once guitarist Peter Buck received the basic tracks of the song from Mills, he too found the music reminiscent of Wilson. Instead of avoiding the comparisons, the group instead opted to "[run] toward it", in Mills' words.

"The idea for it happened driving up and down Santa Monica Boulevard in Los Angeles when I was putting together the Patti Smith book [Two Times Intro: On the Road with Patti Smith]  last year," Stipe said in 1998.

"I had CDs and tape of new songs in the car. I came up with this one line, 'I found a way to make you smile.' All I knew was The Beach Boys had a record or a song called Smile – is that right? – so I was like, 'Well, this will be my gift to [bandmates and Beach Boys fans]  Peter and Mike, and Bill at the time. It was hard to write. It was a high order to say, 'I found a way to make you smile.' I had to come up with, 'OK, what are those ways?' That was tough."

Of the line, 'I found a way to make you smile', Stipe later recalled, "I just thought, that's the most beautiful thing in the world."

Stipe had difficulty writing lyrics for the Up album. In the case of "At My Most Beautiful", it took the singer a year to write the song's verse because he needed to figure out what one could do to prompt the action described in the opening line. The solution finally occurred to him one morning, and he finished writing the words in 45 minutes.

After a conversation with Patti Smith, Stipe was convinced that he needed to be fearless in his songwriting approach. In regards to "At My Most Beautiful", he had grown tired writing ironic love songs and consequently endeavored to create "the most romantic song I'd ever written".

Following the departure of drummer and founding member Bill Berry, the dynamic of the band changed. Buck performed drums on the song; though he admitted he was not adept at playing the instrument, he stated his skill level was sufficient to perform what he referred to as the "Hal Blaine-ish" fills heard on the recording. During the final stages of production for Up in 1998, two days—June 21 and 22—were used to perform audio mixing on the song.

"At My Most Beautiful" is performed in the key of F major. There are several main chord progressions in the song: the introduction is Fmaj7–D–G minor, while the verse follows a I–III–IV–II chord sequence and the chorus ascends using a II–III–IV–V progression.

In the mix, tubular and sleigh bells are heard in the right channel (with their reverberation reaching into the left), piano and bass guitar (both played in quarter note patterns) as well as bass harmonica are heard in the left, and guitar and Mike Mills' backing vocals are centered. Additional instrumentation includes organ in the chorus and cellos in the song's coda. The notes Michael Stipe sings are typical of the vocalist, focusing on the first, third, and fourth notes of the scale he's performing.

In other words, it's not so much like The Beach Boys that it's a pastiche, but sufficiently like them to be a musical homage." He states that the song's use of an F chord with an A bass note in the verse follows the example of Brian Wilson's use of inversions on his band's Pet Sounds album, and that the cellos at the end heightens the section's resemblance to the Beach Boys' "Good Vibrations".

In addition to being its first tribute song, "At My Most Beautiful" was also R.E.M.'s first straightforward love song. The lyrics reference leaving messages on a love interest's answering machine and what Rooksby terms "knowing obsession". He states that the song is about "the ennobling effect of love, yet is aware of its playful narcissism".

Up is the eleventh studio album by American rock band R.E.M., released on October 26, 1998 by Warner Bros. Records. It was the band's first album without original drummer Bill Berry, who retired from the group in October 1997. In his place, R.E.M. used session drummers and drum machines.

Up saw R.E.M. move into electronic music-influenced territory after delivering New Adventures in Hi-Fi in 1996. Ending a 10-year relationship with co-producer Scott Litt, the band engaged the production assistance of Pat McCarthy, who was assisted on most tracks by engineer Nigel Godrich, Radiohead's producer. The single "Daysleeper" became a Top 10 UK hit, and "Lotus", The Beach Boys-influenced "At My Most Beautiful" and "Suspicion" were also released as singles.

"There are certain things I set out to do," Michael Stipe noted. "Rough ideas that I wanted to play around with. One of them was the religious-spiritual versus science-technology-modern-age. There are several songs on the record that, to me, address that. I don't know how other people are going to take them. It's taking off a little bit from 'Undertow' and 'New Test Leper', with the freedom of 'E-Bow the Letter' and 'Country Feedback' – songs that just come out.

What I really wanted was more of that automatic, unconscious stuff… greatly inspired by Patti Smith and various others… Bert Downs said the record's about people falling down and getting back up again. He said there's a lot of that imagery. I'm like, 'Really?'"

Breaking with a tradition that stretched back to the band's 1983 debut, Murmur, Stipe elected to have his complete lyrics included in Up's CD booklet, a practice he would maintain on all subsequent R.E.M. studio albums. "[Mike Mills] was reading the lyrics," he explained, "and he said, 'These are really great – we should print them on the record sleeve.' It was a really good night and there were eight or nine songs on the wall. I said, 'Yeah, we will'… I thought it was a nice way of saying that we are a different band now."

R.E.M. subsequently admitted that they came close to breaking up while recording the album.

The single was followed by the Chronic Town EP in 1982, the band's first release on I.R.S. Records. In 1983, the group released its critically acclaimed debut album, Murmur, and built its reputation over the next few years through subsequent releases, constant touring, and the support of college radio. Following years of underground success, R.E.M. achieved a mainstream hit in 1987 with the single "The One I Love".

The group signed to Warner Bros. Records in 1988, and began to espouse political and environmental concerns while playing large arenas worldwide.

By the early 1990s, when alternative rock began to enter the mainstream, R.E.M. was viewed by subsequent acts such as Nirvana and Pavement as a pioneer of the genre. The band released its two most commercially successful albums, Out of Time (1991) and Automatic for the People (1992), which veered from the band's established sound and catapulted it to international fame. R.E.M.'s 1994 release, Monster, was a return to a more rock-oriented sound, but still continued its run of success. The band began its first tour in six years to support the album; the tour was marred by medical emergencies suffered by three of the band members.

In 1996, R.E.M. re-signed with Warner Bros. for a reported US$80 million, at the time the most expensive recording contract in history. Its 1996 release, New Adventures in Hi-Fi, though critically acclaimed, fared worse commercially than its predecessors. The following year, Bill Berry left the band, while Stipe, Buck, and Mills continued the group as a trio.

Through some changes in musical style, the band continued its career into the next decade with mixed critical and commercial success, despite having sold more than 85 million records worldwide and becoming one of the world's best-selling music artists. In 2007, the band was inducted into the Rock and Roll Hall of Fame, in their first year of eligibility. R.E.M. disbanded amicably in September 2011, announcing the split on its website.

At my most beautiful
I count your eyelashes secretly
With every one, whisper, "I love you"
I let you sleep
I know your closed eye watching me
Listening
I thought I saw a smile